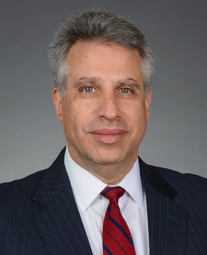 David Fingerhut is a partner at Axelrod, Fingerhut & Dennis, where he focuses on Real Estate, Cooperative and Condominium and Landlord and Tenant Law.

Over the course of his career he has enjoyed a number of litigation victories, including representing a sponsor against the Pakistan Mission to the United Nations in a non-primary residence action in Federal Court which held that diplomatic immunity was not a bar to eviction; representing a cooperative corporation to enforce its ban against washers/dryers against thirty tenant-shareholders in a joint trial, obtaining judgments against all after trial, obtaining an affirmance on appeal and thereafter collecting the cooperatives attorneys’ fees; successfully representing a number of Lower Manhattan buildings in post-September 11, 2001 rent strikes; successfully represented a sponsor in Housing Court litigation against large group of market-rate tenants claiming protections under the Martin Act, obtaining judgments after trial, which judgments were affirmed on appeal, and clarifying New York State Law regarding the rights of landlords regarding market tenants with expired leases in the context of a cooperative conversion; and recently obtained the full reversal on appeal of an after trial decision against a cooperative corporation where the trial court awarded the shareholder plaintiff a one hundred percent maintenance abatement due to the (unproven) claim of infiltration of tobacco smoke.

Mr. Fingerhut has a home on Hilton Head Island, South Carolina. He has served as Chairman of the Hilton Head Island Board of Zoning Appeals, was President of a homeowner’s association and currently sits on the Board of Managers of a condominium. He enjoys spending time with his wife, cooking, reading, bicycling and going to the Island’s many beaches.

View all posts by David →
Osman Dennis
Peter A. Axelrod